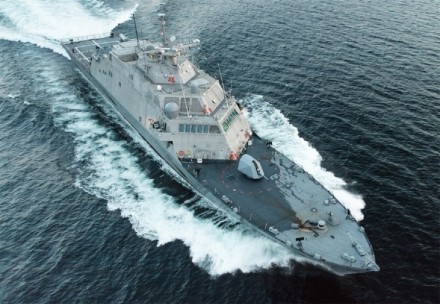 East Aurora, NY–December 4, 2017–Moog Inc. (NYSE: MOG.A and MOG.B) announced today that the Company is a co-sponsor for the USS Little Rock LCS-9 Commissioning. The ship is docked at the Naval and Military Park in Buffalo, NY. Prior to the commissioning ceremony on December 16th, a week-long celebration will take place at Canalside on the Buffalo waterfront. Moog’s sponsorship is part of its Defense sector’s commitment to equipping those who defend freedom.

The Littoral Combat Ship (LCS) is the Navy’s newest class of warship with two variants, the Freedom-Class and Independence-Class. Both warship classes feature Moog components and solutions. Moog’s actuation and stabilization technology is incorporated into the two MK46 naval turrets, each using a 30mm high velocity cannon for shipboard self-defense. The MK46s are part of the surface warfare mission package, a specialized mission package which will be fitted to approximately half of the Freedom-Class and Independence-Class variants in the LCS fleet.

The USS Little Rock will make history on its commissioning. This is the first time in the Navy’s 242-year history that the commissioning of a ship will take place alongside its namesake ship. Since 1977, the decommissioned USS Little Rock Guided Missile Cruiser has been docked at the Buffalo and Erie County Naval and Military Park. “We are pleased to be part of the USS Little Rock commissioning and support the LCS fleet for the U.S. Navy and its allies,” said Jim Riedel, Group Vice President, Moog Defense Sector. "Moog precision technology is integrated into LCS-mission critical capabilities and our solutions will serve the U.S. Warfighters reliably for many years. We are fortunate to witness this historic event in Buffalo, the home of Moog's global headquarters."